Many, if not most, senior dogs eventually develop arthritis, a condition that causes pain and slows them down.  Undergoing surgery is another situation in which pain is a factor  In both of these cicrumstances, you and your veterinarian will want to ensure that appropriate measures are taken to alleviate pain and minimize any suffering your dog might experience.

According to the 2015 American Animal Hospital Association (AAHA) report on pain management in animals, “Pain management is central to veterinary practice…. Alleviating pain is not only a professional obligation (recall the veterinarian’s pledge to ‘the relief of animal pain and suffering’) but also a key contributor to successful case outcomes and enhancement of the veterinarian-client-patient relationship. A commitment to pain management identifies a practice as one that is committed to compassionate care; optimum recovery from illness, injury, or surgery; and enhanced quality of life.”

Over the years that drugs like Rimadyl and other NSAIDs have been available, they have been widely prescribed by veterinarians for the management of pain and inflammation following surgery or, for extended periods, to manage the pain and discomfort of arthritis, also known as “degenerative joint disease.”   According to the 2015 AAHA report, “Degenerative joint disease is ubiquitous, found in pets of all ages, and inevitably progresses over time.”

All senior dog guardians want to ensure the relief from pain and improved quality of life that NSAIDs promise their dogs.  As the AAHA report points out, however, “The leading risk factors for NSAID-associated GI perforations are:  incorrect dosing, concurrent use with other NSAIDs or corticosteroids, and continued use despite GI signs or anorexia….  Signs of GI toxicity usually emerge within 2–4 weeks but can occur at any at any point during administration.  It is critical that veterinarians communicate NSAID toxicity risk factors to pet owners (e.g., providing client information that describes potential side effects, including the commercial circulars provided by drug manufacturers and instruction on when to stop medication and contact a veterinarian).”

If, at this point, you have decided to avoid NSAIDS, please go to the page on Pain Management Alternatives.

In addition to Rimadyl, some brand name NSAIDS are Etogesic, Metacam, Deramaxx, Previcox, Zubrin, Novox, Vetprofen.   The generic name for the drug is “carprofen.”   As of April 1, 2022, the FDA had approved a generic form of NSAID — a firocxib chewable tablet called “Firox” — “…for the control of postoperative pain and inflammation associated with soft-tissue and orthopedic surgery in dogs.”

A current list of brand-name NSAIDs approved by the FDA’s Center for Veterinary Medicine is presented on the FDA site.

The FDA’s CVM site states:
“As with any medication, veterinarians should discuss the benefits as well as the risks of the drugs with their clients when prescribing an NSAID. Every year millions of doses of medications are prescribed for dogs with good reason—but many adverse reactions occur. Most adverse reactions are mild, but some result in permanent impairment or even death. If the client can recognize a possible reaction and stop the medication while seeking veterinary attention for the dog, quick action may make the difference between a good outcome and a disaster.

“The most common side effects from NSAIDs include vomiting, loss of appetite, depression/lethargy, and diarrhea. Some side effects can be serious, especially if the drug is not used according to labeled directions, resulting in the need for medical care. Serious adverse reactions include gastric ulcers and perforations, kidney and liver problems. Death may result in some instances.”

FDA’s Extensive Guidelines for Prescription and Use of NSAIDs for Dogs
The Food and Drug Administration has issued guidelines covering the prescription and use of NSAIDs. Please review them, and be certain your veterinarian has seen them, before administering them to your dog. Also see “Get the Facts about Pain Relievers,” an excellent article published by the FDA.

Bloodwork Prior to and During the Course of an NSAID Regimen
Ideally, a senior dog should have bloodwork done before being placed on an NSAID regimen and at regular intervals over the course of therapy.  Blood testing will reveal whether a dog has compromised liver or kidney function, in which case the dog is not a good candidate for Rimadyl or another NSAID.  Unfortunately, an aging dog may, in fact, have such compromised function.  Bloodwork does not come cheap, and, for that reason, veterinarians may be reluctant to suggest it and dog guardians reluctant to sign on for it.  NSAIDs are also used for pain control following surgery; in that case, bloodwork will have been done as part of the preparation for surgery.  Again, however, if a dog is on an NSAID regimen over a period of time, bloodwork needs to be done at regular intervals.

Mar Vista Animal Medical Center in Los Angeles advises clients as follows:
“A dog that is potentially a candidate for long term use of carprofen should have a complete examination by the veterinarian, a screening blood panel to establish baseline biochemical values, and ideally some kind of recheck testing two weeks after starting carprofen. This is because most adverse reactions, unusual as they may be, occur within this initial time frame and it is important that they be recognized before they get out of hand. After this initial period, complete blood panels should be screened every six months, an important step with any medication for long term use, not just the NSAIDs.”

Why the Senior Dogs Project Wants You to Know about NSAIDS
We can’t imagine anything worse than feeling you have played a part in the death of your dog — whether you’ve had the dog since puppyhood or have recently adopted a senior dog.  It can be an especially wrenching experience if, in making a commitment to saving the life of a senior dog by adopting him before he was to be euthanized at a shelter, you have inadvertently followed a path that led to his death….even while information that might have been provided by the drug manufacturer could have been instrumental in preventing his death. (This scenario played out in reality with a Chocolate Labrador Retriever named “George,” whose veterinarian prescribed Rimadyl without providing any warning of potential side effects to George’s guardian, Jean Townsend of Johns Island, SC.)

Want to stay current on recalls of medications or newly approved drugs?  Get the latest updates from the FDA’s Center for Veterinary Medicine by logging onto their site: FDA/CVM. 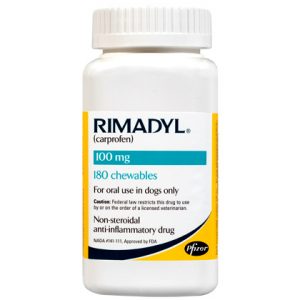 If your veterinarian prescribes an anti-inflammatory drug for your senior dog (including, but not limited to carprofen (Rimadyl, Novox), deracoxib (Deramaxx), firocoxib (Previcox, Equioxx), meloxicam (Metacam), piroxicam (Feldene) or robenacoxib (Onsior), obtain a “Consumer Information Sheet” that describes the potential side effects.  Before beginning a course of treatment with any NSAID, your veterinarian should do bloodwork to determine whether your senior has any health issues that would preclude using the drug.

PLEASE SIGN! Petition to protect dogs from drug side effects…. 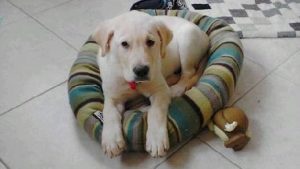 Buoy’s Law is coming before the New York State Assembly for consideration.  Inspired by the tragic death of three-year-old Golden Retriever “Buoy” the law will make it mandatory that veterinarians always provide information on a drug’s side effects when writing prescriptions.  Buoy’s devastated guardians write, “Buoy was prescribed with a pain killer (Rimadyl) after his surgery, and we were not provided with any warning whatsoever that this medication was well-known to cause serious adverse side effects in dogs, including kidney damage and death.”  To show your support for this law, please sign the petition.