June 21, 2021…..While checking out pet news this morning, we came across information on pet food recalls.  Salmonella was mentioned in almost every single notice of a recall.  Here’s the link showing these recalls:  Pet food Recalls

More information on Salmonella from the healthcareforpets site:

“Salmonella can affect animals eating the product and there is risk to humans from handling contaminated products, especially if they have not thoroughly washed their hands after having contact with the products or any surfaces exposed to these products.

“Healthy people infected with Salmonella should monitor themselves for some or all of the following symptoms: nausea, vomiting, diarrhea or bloody diarrhea, abdominal cramping and fever. Rarely, Salmonella can result in more serious ailments, including arterial infections, endocarditis, arthritis, muscle pain, eye irritation, and urinary tract symptoms. Consumers exhibiting these signs after having contact with this product should contact their healthcare providers.

“Dogs with Salmonella infections may be lethargic and have diarrhea or bloody diarrhea, fever, and vomiting. Some dogs will have only decreased appetite, fever and abdominal pain. Infected but otherwise healthy dogs can be carriers and infect other animals or humans. If your dog has consumed the recalled product and has these symptoms, please contact your veterinarian.”

If you’re considering a change in how you feed your dog, please review the information on nutrition.

We thought Joachin Phoenix said it all at the Academy Awards 2020 event  when he spoke of “speciesism” — our assumption that our human needs take precedence over the needs of other beings in the universe.  Here’s an excerpt from his speech:

“I think that we’ve become very disconnected from the natural world. And many of us, what we’re guilty of, is an egocentric worldview, the belief that we’re the center of the universe. We go into the natural world and we plunder it for its resources. We feel entitled to artificially inseminate a cow, and when she gives birth, we steal her baby, even though her cries of anguish are unmistakable. And then we take her milk that’s intended for her calf and we put it in our coffee and our cereal, and I think we fear the idea of personal change, because we think that we have to sacrifice something, to give something up. But human beings, at our best, are so inventive and creative and ingenious, and I think that when we use love and compassion as our guiding principles, we can create, develop, and implement systems of change that are beneficial to all sentient beings and to the environment. . . .

The Power of Kindness

We liked a HuffPost piece we read on the power of kindness and its effect on a person.  You’ll find it interesting to learn that performing an act of kindness actually benefits the person performing the act.  The article states, “The very act of expressing graciousness to one another can make us more empathetic of other people’s hardships.”  Of course, we’d like to mention that adopting a senior dog is an extremely kind act.  We hope you’ll use the srdogs.com site to find your way to perform that act and to reap the benefits.

The Price of a Dog and the Love Given

If someone pays more for a dog, does that mean the dog will be better loved and better treated?  We can answer an unequivocal “No” to that question, as we’ve seen the love that people shower on the “free” senior dogs that they adopt from the rescue agencies and shelters listed here on this site.  Many agencies offer free adoptions to senior people (usually over the age of 55) or make an offer of free adoption on special “adoption days.”

In 2017 Evangers “Hunk of Beef” dog food was found to be contaminated with pentobarbital (a euthanizing drug) and, in fact, contained some amount of horse meat.  Three dogs were sickened and one died as a result of eating the food. Unbeknownst to Evangers, their supplier had included euthanized horses in its delivery to the Evangers factory.  We continue to wonder how common such practices are……

Vegetarian and Vegan Diets for Dogs

Can dogs be healthy on a vegetarian or vegan diet? They jury is still out.  UC Davis Veterinary School reports:

“Vegetarian diets are not the norm for most pets. However, some owners prefer to feed plant-based diets to their animals for ethical reasons, while other pets require non-meat diets due to specific health problems, including bladders stones, some types of liver disease and food allergies. But these diets can be difficult to balance. ‘When you formulate a diet for a dog or a cat using vegetarian protein sources, you have to be really careful that you’re doing it appropriately,’ Larsen says.

“The study, which was led by clinical nutrition resident Dr. Kayo Kanakubo with support from Larsen, also looked at the labels on these diets, and what they found there was more surprising. While the rules about pet food labeling can be confusing, most manufacturers follow the regulations set forth by the Association of American Feed Control Officials (AAFCO), which require them to disclose nine different categories of information on their labels, including calorie content and an ingredient list.

“Only three of the 24 vegetarian diets the researchers studied had accurate labels that included all nine components. For example, seven diets got the guaranteed analysis wrong, seven had errors in their ingredient list and many didn’t have feeding directions. ‘If a company does not have accurate or legal labels, then I don’t have a lot of confidence that they can handle the many other details required to make a really healthful, wholesome and safe pet food,’ Larsen says. 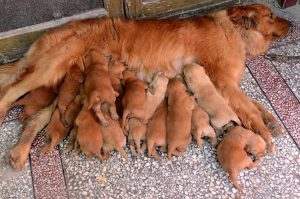 One female dog and her offspring can produce 67,000 puppies in six years. One female cat and her offspring can produce 420,000 kittens in seven years. Between 8 to 12 million animals enter U.S. shelters annually; 35-60% are euthanized, almost all because there are no homes for them. Please don’t breed or buy while shelter animals die; adopt a spayed or neutered companion animal from a shelter or rescue organization. Find one here.

Time for a Change….

We don’t think of the work of the Senior Dogs Project as being “confrontational” or “disturbing.” However, every so often we’re reminded in a very graphic way of what happens to millions (that’s right, millions) of animals in shelters every year in the U.S. 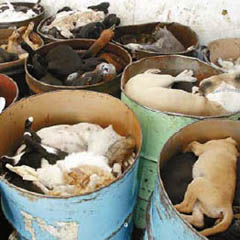 The photo at the right shows the barrels of euthanized animals from one shelter on one day. Nearly all of these animals were adoptable, but there simply were not enough families “out there” to take them to a loving home. It’s the same story at the majority of U.S. shelters. As a civilized society, we really do need to address this problem. It’s not fair to the animals; it’s not fair to the staff at shelters; and it’s a waste of taxpayer money.  You can do your part to encourage change by never purchasing an animal from a breeder or pet store, but instead adopting from your local shelter or a rescue organization; by encouraging friends and relatives to do the same; and by ensuring that your companion animals have been spayed or neutered.

Thinking about who and what we eat…..

“Most people can’t explain why they won’t eat horse meat but will eat rabbits, cows, sheep, deer, and other gentle, sentient creatures……and in some Asian countries it’s perfectly normal to put dogs and cats on your dinner plate…..”

We were reminded of this conundrum when we encountered an opinion piece written by Andy Rooney, a former commentator on the TV show, “CBS Sixty Minutes.” Mr. Rooney died in November 2011, but his comments remain current and relevant.

Here are excerpts from his remarks:

“I like steak, lamb and pork chops but you couldn’t make me eat rabbit or horse. When I was in France during World War II, horses would often be killed in the fields by artillery fire and the French farmers would wait until the shooting stopped and then rush out to carve up the dead horses for dinner.

“I don’t know why anyone who eats beef finds the idea of eating a horse so repulsive but I’m one of them. Horses seem so friendly and I don’t like to be reminded of the animal I’m eating. I often pass a farm with cows grazing in the field and I think to myself how terrible it is that human beings grow other animals just to kill them and eat them.

“Most of us think of vegetarians as nuts and I’m not a vegetarian but I wouldn’t be surprised if we came to a time in 50 or 100 years when civilized people everywhere refused to eat animals. I could be one of them.”

From the Humane Society of the United States website:

Reduce, refine, and replace. Three simple actions can reduce the suffering of billions of farm animals on factory farms.

The vast majority of meat, eggs, and dairy products sold in American grocery chains and restaurants comes from animals raised in intensive-confinement systems (so-called factory farms) that impose significant stress on the animals in pursuit of efficiency. The result is that living creatures are often being treated as biological “machines.”

Explore our Guide to Meat-Free Meals and get recipes, cooking tips, and news of interest to people who are voting with their forks to support humane treatment of farm animals.

“Always hold firmly to the thought that each one of us can do something to bring some portion of misery to an end.” Author unknown

“The assumption that animals are without rights, and the illusion that our treatment of them has no moral significance, is a positively outrageous example of Western crudity and barbarity. Universal compassion is the only guarantee of morality.” — Arthur Schopenhauer, German Philosopher

“A man is truly ethical only when he obeys the compulsion to help all life which he is able to assist, and shrinks from injuring anything that lives.” — Albert Schweitzer, Alsatian Theologian, Musician, and Medical Missionary

“Producing animals for sale is a greedy and callous business in a world where there is a critical and chronic shortage of good homes for dogs, cats, and other animals, and the only ‘responsible breeders’ are ones who, upon learning about their contribution to the overpopulation crisis, spay or neuter their animals, and get out of the business all together.” – PETA, Animal Rights Uncompromised: There’s No Such Thing as a ‘Responsible Breeder’

“You have just dined, and however scrupulously the slaughterhouse is concealed in the graceful distance of miles, there is complicity.” — Ralph Waldo Emerson, essayist

“As long as there are slaughterhouses, there will be battlefields.” — Leo Tolstoy, author

“I cannot fish without falling a little in self-respect…always when I have done I feel it would have been better if I had not fished.”– Henry David Thoreau, author

“Atrocities are no less atrocities when they occur in laboratories and are called medical research.” — George Bernard Shaw

“. . .if we treated animals as they deserve, human inhumanity to humans would stand out all the more appallingly. We might then turn our attention to the next step beyond human civilization: humane civilization. Justice for all.” — Carl Safina, Beyond Words: What Animals Think and Feel, p. 411.